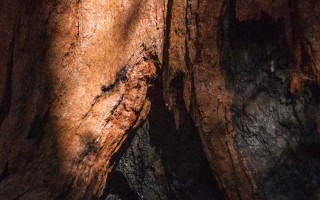 In the Fall of 1885 a group of socialist utopians created The Kaweah Colony in the Giant Forest in what is now Sequoia National Park.  Their community was based equal work and equal compensation for men and women.  The colonists filed a claim for 160 acres of public land under the Timber and Stone Act of 1878. This law granted 160 acre tracts of timber-producing land to private parties at no less than $2.50 per acre in an effort to bring into ‘best use’ land that was widely believed to be an inexhaustible resource.  The Kaweah Colony named the largest tree the Karl Marx Tree after the 19th-century social philosopher.

At the time, there was no National Park Service, so in May of 1891 Troop K of the Fourth U.S. Cavalry arrived with orders to protect the park, primarily from squatting and poaching.  The parks were not designed, nor yet intended, for visitors.

The era of public visitation would begin in 1915 when Stephen Mather, the marketing genius who made Borax famous, accepted a position as an assistant to the Secretary of the Interior. He convinced Congress to create the National Park Service in 1916 and he became its first director. Mather created a professionalized ranger force and led a crusade to “democratize” the parks by improving roads and accommodations to make them accessible to the American public.

The story of the Karl Marx Tree’s renaming to General Sherman is deeply embedded in oral tradition — but despite the prevalence of the legend, the popular account is most likely inaccurate.  According to tradition, a cattle rancher and trapper named James Wolverton discovered the tree on August 7th, 1879 and named it after his revered Civil War general, General William Tecumseh Sherman.

One of the problems with the folk story is that the likelihood of a cowboy (one who spent months in the wilderness) having recorded the specific date on which he discovered a large tree is extremely low. The man was not there on a mission where he might have kept logs or recorded findings.  Furthermore, it is impossible to tell from visual inspection that Sherman is the largest in the grove, so it is impossible to know if the cowboy had even christened the correct tree.

No historical documents exist from this date.  In fact, the first documented reference to the tree as “General Sherman” occurs in a solder’s report from 1897.

1897 happens to be the same year in which a plaque naming the tree General Sherman was erected. U.S. Army troops had come each summer since 1891 to protect the trees, so one should expect to find earlier documentation of the name if it was actually named by Wolverton. It seems more likely that the soldiers who expelled the Kaweah Colony renamed the Karl Marx Tree.  In fact, the story of Wolverton naming the tree was not published until 1921, when it appeared in a park guide.  Wolverton is still memorialized, nonetheless, by the Wolverton Campground, now a volunteer camp and formerly the only Boyscout Camp in any National Park that bears his name today.