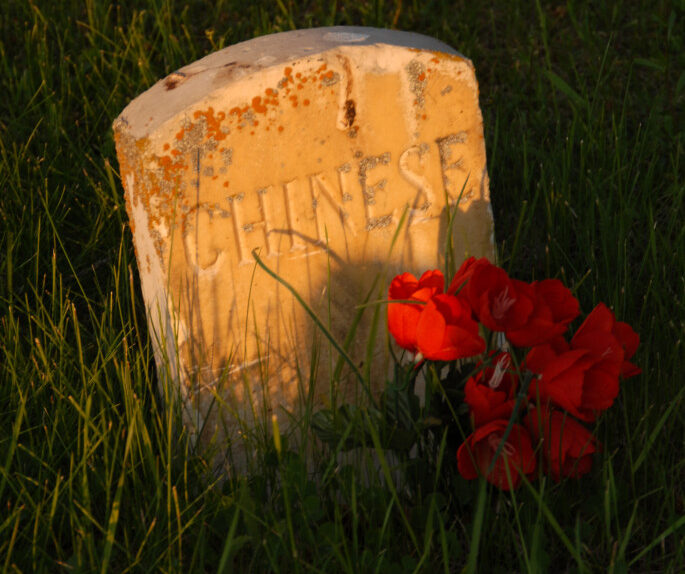 My photo of an anonymous Chinese grave is from a visit to New Meadows, Idaho, just outside the slightly less tiny town of McCall.

I was on a visit with the family of one of my closest friends, Staysha, whom I have known since I was in first grade and she was in second.

We’d had a wonderful trip, chatting, making meals, and getting ATVs stuck in the mud. We visited the farmers market, which had just one vegetable available, since it was only June and still too cold to harvest anything but leeks. Saying goodbye was melancholy, however. It evoked the ghosts of our childhood, a few lost dreams, and the misery of wondering if we would ever have a trip like this again. We were both recently married, Staysha’s parents were getting older, and I knew that she would soon have children.

On the last day, we went down the road to the Meadows Valley Cemetery. We spent a while checking out the neighboring farm, where a sheep was bleeding from its hindquarters. We squinted our eyes and stepped left and right, but were just a little too far to tell if it was wounded or giving birth. Eventually we gave up, and wandered into the tiny graveyard, where we saw headstones dating back to the early 1800s (Bauer, 2007). We wandered around, enjoying the serene green grass and pale blue sky, while secretly mourning the unknown in our own futures, along with the lives of those interred.

As we approached the back corner, the high latitude light gave the graves a warm glow, and I saw a line of headstones that took my breath away. Tucked away, without a date, were a scattering of headstones that said simply, “Chinese”.

Many Chinese people came to Idaho to work on the railroads, mine, and work in fish canneries (NPS, 1990). I am not a scholar of Chinese history in Idaho, or anywhere, but I have learned that the railroad opened up in New Meadows in 1911. I found no record of mining or a fish cannery, so I assume that the person who lies here worked on the railroad. The original town of Meadows was actually a mile away, but when the railroad depot opened, New Meadows developed and many houses and stores from Meadows were moved to the new town. (The Historic P & IN Railway Depot, n.d.).

Two hours north of New Meadows, you will find the old mining town of Warren. Chinese people are believed to have been more accepted and integrated into the community in Warren than in most mining towns (Edmunson, 2012)(NPS, 1990). Larry Kingsbury, an archaeologist specializing in cultural resource management, says that many Chinese people came to the West Coast by ship after the California Gold Rush began in 1848, primarily from the Guangdong Province (Burton, 1994) (Kingsbury, n.d.). They moved beyond California, and arrived in Idaho in the 1860s. Unlike in other mining towns, the residents of Warren voted to permit them to buy claims or lease the right to mine (NPS, 1990). Chinese became the dominant ethnicity, and the Chinese community continued to practice their customs surrounding death (Burton, 1994) (Kingsbury, n.d.).

Kingsbury describes the Chinese cemetery on the hillside above Warren. From 1870 to 1920 the cemetery was used exclusively for burying Chinese people. They continued practices such as “the feeding of the dead”, wherein they would barbecue chickens and hogs, and make an offering of food to the deceased, as well as burning joss sticks and colored paper while pouring whisky on the ground (Kingsbury, n.d.).

Kingsbury says that exhumation was another important burial practice. When a Chinese man died, he would be buried, and later exhumed so that his bones could be boiled then shipped back to China (Kingsbury, n.d.).

He tells the story of one resident, Frank Sheiffer, who reported witnessing an exhumation. He says that Sheiffer went up the hill to watch the men dig up the bodies. They uncovered the body of a Chinese woman that had not decomposed. When they realized it was a woman, they covered the body back up, not to honor her but because women did not have the same rights as men and the grave diggers were not paid to exhume them. Kingsbury says that several local stories mention a Chinese woman named Too Hay, and perhaps one or two others who were never exhumed. It is believed that these are the only remaining burials at the site (Kingsbury, n.d.).

In addition to the burial site at Warren, there is a massacre site in Hells Canyon along the Snake River (Nokes, 2006) and a Chinese Memorial Cemetery near the Bliss Rodeo Grounds in Gooding County, Idaho. In Bliss, six crosses mark what I hope are exactly six lives, and not more. Those interred at the site were working as section hands on the railroad, and were killed by a dynamite explosion in 1883 (Driesel, 2013).

There are additional Chinese grave sites, and locations where Chinese people made important history across the state. I cannot tell for sure why the Chinese people buried in New Meadows came, but I can say that no one bothered to find out their names.