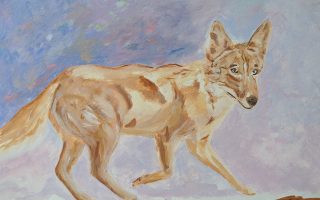 As I drove through Cal Poly, Pomona this morning, I saw a coyote in a pasture across the road, pouncing over and over as he attempted to capture a squirrel.  After five or six bounds, the coyote killed its prey. The coyote tore off a chunk and ate it, took a few steps, and tore off another. It looked at me periodically, until I had to go.