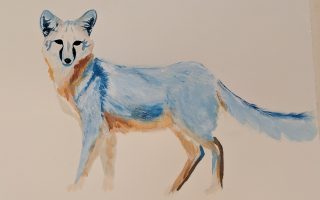 A Tour Up Mt. Baldy and San Antonio Canyon

As you rise from the valley floor up a mountain range as tall as the San Gabriel Mountains, everything changes. Gravity pushes the air molecules, which carry heat energy, downward, so higher elevations are much colder than the valley floor. On the cismontane, or ocean, side of the range, water evaporates off of the ocean, and rises as it hits the mountain wall. As it rises it gets colder and condenses, so falls as rain and snow, leaving a desert on the other, transmontane, side. The change in rainfall, temperature, and elevation changes which plants grow, and which animals can live there.

The images in this collection show just a few of the species that live in each elevational band on the cismontane side of Mt. San Antonio.

The first plant community that you encounter as you work your way up the coastal side of the San Gabriel Mountains is the coastal sage scrub, which grows on the alluvium at the bases of coastal foothills. It is home to short, flexible plants such as California sagebrush, California buckwheat, black sage, and lemonade berry, white sage on adobe slopes of the foothills, grasses in damp hollows or clearings, and dense patches of prickly pear cactus in disturbed areas. The coastal sage scrub is home to the coyote, the gray fox, rabbits, striped skunks, kangaroo rats, woodrats, and many species of mice.

The second plant community from the bottom is the southern oak woodland, which, like the coastal sage scrub, is limited to the coastal side of the range. Along canyon floors and mouths, oaks interlace to form an overhead canopy. Streams are bordered by alders, willows, and blackberries, where meadow mice and shrews make their home. Open canyon floors house the western gray squirrel, which is dependent upon the trees that grow over the currants, lemonade berry, and sugar sumac. Racoons are the most important predator in the oak woodland, where they prey upon berries, nuts, insects, rodents, frogs, fish, and birds eggs. Rattlesnakes, constrictors, bobcats, and mountain lions also make the oak woodland their home.

The chaparral, a dense forest of plants from three to ten feet tall, is characteristic of the Pacific slope of the San Gabriel Mountains. Its interlacing branches form nearly impenetrable thickets that were once interspersed with grizzly trails, but the grizzly bear, which adorns our state flag, has been extirpated from California. Fire, slope, exposure, and elevation help create microclimates within the chaparral. Lower, arid slopes house nearly pure stands of chamise, Less dry exposures host sumac and California lilac, which grows a few years after a fire. The granite talus holds scrub oak and California bay laurel, and small groves of bigcone spruce stand above it all. A few species of mice and woodrats make their home in the chaparral, but compact, rocky soil seems to limit burrowing rodents. Black bears and rarely seen ringtails pass through.

A significant change occurs when we reach the yellow pine forest, well within the snow line. Jeffrey pine, ponderosa pine, and sugar pine form dense stands with little undergrowth. Due to the small amount of cover, most mammals make their homes in adjacent habitat, but birds are abundant in timber, while ground squirrels venture onto the open ground to forage. One night in the campground can reveal passing deer, black bears, raccoons, gray foxes, bobcats, and ringtails.

Several elements conspire to make Mt. Baldy bald. The timberline ends around 8,500 feet, at which point most of the air’s water has already fallen as snow. Conditions are dry and windy, and the thin air provides little UV protection. Soils are thin because, like the air, gravity has pushed it down below. Only the toughest species survive on the high mountain peaks, including the lodgepole chipmunk, which lives among the snowbrush, bush chinquapin, and manzanita at the top. Reintroduced Nelson’s bighorn sheep make their homes along the rocky slopes. At the upper limit of tree growth, the lodgepole pine grows as a krummholz tree, branches shaped into one direction by the icy wind. Here it grows more like its Latin name, Pinus contorta, than its common one.