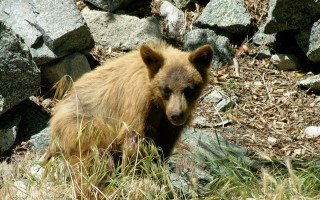 Anyone who camps at Wolverton in Sequoia National Park is likely to see a large number of black bears during their stay. Although Wolverton was a Boy Scout Camp from 1939-2011, today it is reserved for volunteer groups, so its use is less common.

With all of the popular human attractions nearby, bears seem to use this rarely visited campground as a highway to get to important food sources. How do biologists know, however, if keeping the campground empty allows bears to use it more than they otherwise would?

Data was never collected on how frequently bears passed through during the Boy Scout years. Wildlife biologists are constantly faced with this kind of challenge when attempting to analyze changes in species distribution. Historic records often don’t exist.

Luckily for the Sierra Nevada, however, a young park naturalist working in the early days of Yosemite National Park was determined to document all of the mammals that lived in the region at that time.

In 1929 George Melendez Wright persuaded his supervisors to let him conduct a four-year plant and wildlife survey in the Sierra Nevada parks. Park Director Horace Albright strongly supported the program, but Wright had to use his own funds until the program’s value could be proven. Luckily, Wright was from a wealthy family: his father was a ship captain and his mother was from one of El Salvador’s most prominent dynasties. The survey was the first of its kind, and lead to two reports that urged the park service to stop intervening in natural processes through programs such as predator killing, or feeding bears at dumps.

The information he collected is now invaluable in examining the effects of human visitation, climate change, and other impacts on the region. His data provides a rare baseline with which to compare current species distributions.

Researchers recently resurveyed the area George Melendez Wright investigated back in 1929. Today, about half of the species are at different elevations than they were back then, on average about 500 yards higher. Worldwide, 143 separate studies have shown that species are changing where they live. More than 80 percent of the documented changes show species moving to more polar latitudes or higher elevation where temperatures are cooler, a pattern congruent with adaptation to a changing climate.

UPDATE: No bears were seen in the Wolverton Campground during the week of August 10-17, 2017. The bears may have learned that the campground is once again human occupied during the summer months, but the variation could be due to cyclic population fluctuations or other factors.